Nani’s not going anywhere… but he should 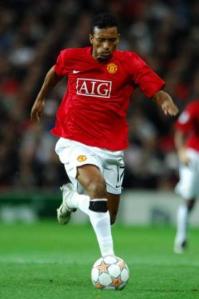 Nani on the run... out of Old Trafford?

Sir Alex said that Portuguese winger Nani will not be sold in January. “He is only 23,” he said. “If someone came in for Nani in January we would tell him that he is going absolutely nowhere.”

Sticking with one’s players is admirable but, as Kenny Rogers said, you gotta know when to hold them and know when to fold them. And it is, in my opinion, time for Nani to go. Make it a back-loaded deal, Football Manager-style (i.e. get money when he plays X number of games and scores X number of goals) to maximize the value. But there is no place for Nani at Manchester United. Sir Alex seems to agree with that assessment: “He has suffered because (Luis Antonio) Valencia’s form has been excellent and because (Gabriel) Obertan has emerged as an interesting player.”

So where does that leave Nani if both Valencia and Obertan are doing well? On the bench, that’s where.

Time to cash in, especially if AC Milan and Benfica are interested.

El clásico: Ibra is back! And so is CRonaldo!

The only clásico that really matters re-ignited its feud today at the Camp Nou in the wonderful city of Barcelona. And FC Barcelona proved to be quite rude hosts by defeating Real Madrid by a score of 1-0 on Zlatan Ibrahimović’s excellent goal (off an absurdly beautiful pass from Dani Alves) in the 56th minute. And that was after Real dominated the first 20 minutes – Cristiano Ronaldo, in his return, was outstanding – but failed to put one away.

After the 25th minute or so, Barcelona took over. They dominated possession by completing their trademark tic-tac-toe passes. Even Ibrahimović got into the act when he reset the attack by passing back in order to move forward. For anyone who is a fan of beautiful football, Barcelona is the team to watch (Arsenal can’t hold a candle to Barça’s passing, possession, and commitment).

Anyone who claims to be a fan of soccer owes it to themselves and watch this game, even though Barcelona isn’t at the top of its game for long stretches.

Uncreative title, I know. I couldn’t think of anything fun. C’est la vie.

In any event, it was a good match. It was very exciting although injuries took their toll, which is always unpleasant. That said, the reinforcements more than held their own for 120 minutes and 7 rounds of penalty kicks. Surprisingly, Landon Donovan and, to a lesser extent, David Beckham, were absent for long stretches of play. Donovan was particularly surprising, given how well he’s played for the national team over the last year or so.

After all of the playing, in which several players, including Andy Williams and Beckham, ran themselves ragged, it came down to penalty kicks. The exciting/aggravating time in soccer. Both keepers played well, with Real Salt Lake’s (I hate their name, BTW. It is hands-down the dumbest name in MLS. I don’t understand why they didn’t call it “Royal Salt Lake” or the “Salt Lake Royals” or something. Why the Spanish? Why???) Nick Rimando performed his wizardry again: stopping just enough Galaxy shots to win the match and the MVP award. Surprisingly, Donovan missed his penalty kick. Go figure.

The atmosphere was electric; Seattle did a wonderful job hosting the Cup and creating the atmosphere. Over 46,000 people watched the match. They weren’t disappointed. Among some, the idea has already taken hold that the atmosphere proves soccer has arrived; I wouldn’t go that far but it’s definitely a step in the right direction. 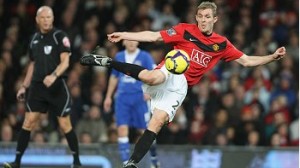 I’m going to keep this brief: Manchester United dominated Everton today at Old Trafford. From the kickoff, United dominated possession and kept the pressure on the Everton back four. A good number of chances were created even before Darren Fletcher’s excellent goal in the 35th minute. I’ll digress for a second for some illustrative superlatives: it was an amazing, impressive, shockingly good goal. Darren, I didn’t know you had it in you. I am impressed by both the goal and his form this season. Back on point. Everton came out somewhat better in the second half but Michael Carrick’s (him again!) goal in the 67th minute sealed the victory. Antonio Valencia’s goal in the 76th minutes – bouncing in off the unlucky Leighton Baines – was icing on the cake.

Good teams have short memories. In this case, the fact that the defeat at Chelsea’s hands happened 2 weeks ago probably had a lot to do with it. The Fox Soccer Channel announcers made a good point: last year at this time, United lost to Arsenal and then proceeded to go on a 16-match unbeaten run. Perhaps United will round into form now after looking ragged for two or three weeks before the international break.

Arsène Wenger today announced that he is disappointed with the way the French team qualified for the World Cup. He said:

“For the sense of justice it is quite embarrassing to see. I think even France is embarrassed. We didn’t play well at all and we won the game and won the qualification with a goal that was not a goal.”

Combine that with his lucid, though somewhat wrong, comments about signing young players and we have an interesting question: is Wenger the moral compass of the soccer world?

It’s interesting to ponder, esp. considering his transfer record. As Arsenal’s manager he has not been afraid to use the rules to his advantage. However, he also has the courage of his convictions, which is a good thing.

I’ll have to think more about this. What do others think?

Because FIFA said so. And that happened even though Thierry Henry said it would be the fairest solution.

Arsène Wenger chimed in, as well, noting that the referee should have asked for help:

“For two reasons; first of all Henry didn’t celebrate at the start, that gives an indication to the referee, but spontaneously 11 Irish players came to see the referee. That doesn’t happen if it’s not something obvious. You have two, three or four but not 11 and that convinced him to go and see the linesman as well and say ‘Listen, I didn’t see what happened, can you help me?'”

That, to me, is what makes a great referee great: the ability to ask for help. A great referee needs to realize that he can’t see everything. After, assistant referees are there for a reason: to help you out. With all that said, there is no way that referee Martin Hansson can be anything but the goat. Too bad FIFA won’t do anything about it.

A lot of soccer players – and athletes in general – talk about honor. Usually they mean something like playing to honor a dead, dying, or otherwise important relative or stranger or great player from the past. Announcers push their morality onto the players. The best example in the US is the sanctimonious football and baseball announcer Joe Buck. Rarely does anyone talk about honor on the pitch.

David Halberstom wrote a great book called The Breaks of the Game which basically sums up how athletes feel about cheating, luck, or what have you. It boils down to the idea that everything evens out, that everyone will eventually get the same number of breaks. Thierry Henry implied as much after his handball tied the match with Ireland yesterday. ”It was a handball, but I’m not the ref,” he said on BBC Radio Five Live. ”The ball hit my arm, fell in front of me and I played it. The ref allowed it. That’s a question you should ask him.” The player admitted the mistake but blamed the ref for not catching it. Them’s the breaks, he says.

Except “breaks” is a terms to describe something flukey. It’s pretty obvious that Henry created his own break there by cradling the ball so it wouldn’t go out of bounds and then passing across the box, which William Gallas slotted home for the tying goal (and the goal that put France through to the World Cup, something it does not deserve even a little bit). If it was accidental, I could accept that. But it clearly wasn’t. It was purposeful. It was intentional. It was a desperate act by a member of a desperate team. Imagine the ignominy if France had not made it to the World Cup!

One could argue that Ireland did it to themselves by not winning in Dublin on Saturday. Sure, that holds some water. But not enough. Ireland played better yesterday and scored a legitimate goal. A penalty shootout should have been their just reward, if not for Henry’s chicanery.

The FAI is, predictably, apoplectic. It wants a replay, which does have some precedent (a 2005 match between Uzbekistan and Bahrain was declared invalid after a referee mistake). FIFA should do the right thing: order a replay. Perhaps France will win 2-0 and erase any doubt. Perhaps Ireland will win 2-0 and overcome the goal given up in Dublin. Who knows? The only thing I know is that the result should not stand. It’s the moral thing to do.