On to Group E… 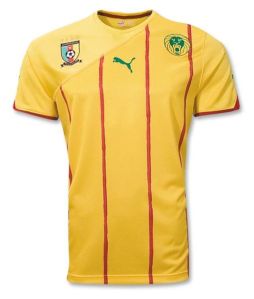 Cameroon away jersey for the 2010 World Cup

Cameroon’s away shirt is much more interesting than its home shirt. I like the yellow and the red stripes. The large crests are symmetrical and have the same color scheme. The shoulder has the same design as the other Puma jerseys. But the best part is the large green Indomitable Lion crest on the chest. Cameroon has one of the best nicknames in sports and I love how it’s represented on their jersey. This shirt is a win for me and I hope they wear it more than once in the World Cup. 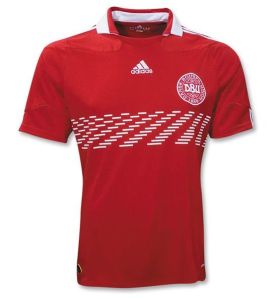 As shirts go, this is pretty uninspired from Adidas. I realize that Denmark typically wears red (which is fine) but the weird Tetris- or BlackBerry Brickbreaker-like blocks in the middle do nothing for me. It is, on the whole, quite boring. I expected more from the Danes. 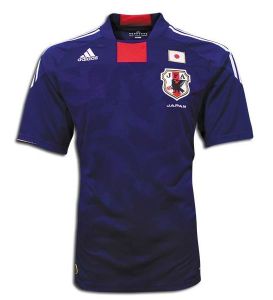 Japan’s blue home shirt is excellent. The color is well-chosen and stately. And it looks like Adidas actually made an effort to make the shirt interesting. It’s hard to see but there are a bunch of small patterns all over the shirt; I think they’re in a darker blue. Of course, now that I look at it again, the random patterns could just be a bad photograph. Either way, I like the shirt’s simplicity. 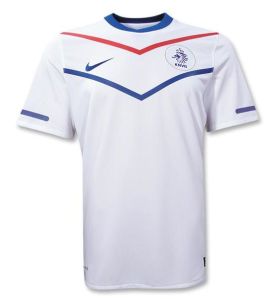 Netherlands away jersey for the 2010 World Cup

Everyone knows about the completely and totally awesome home shirt. It’s orange and it rules. The name and number fonts are pretty horrid but the shirt itself is awesome. So I decided to critique the away shirt (which might be worn once, and only because Nike told them to). The white away shirt is rather plain, though I do like the chevrons on the front to break up the monotony. The best part about this shirt is what it doesn’t have: no stupid bells and whistles or extraneous piping or anything else manufacturers like to do now. This is another winner for Nike, IMO (could it be that Nike is actually making reasonably decent designs? Nawwwww….)

Just found these. Both Cameroon and Ivory Coast have new kits for their World Cup Qualifiers. 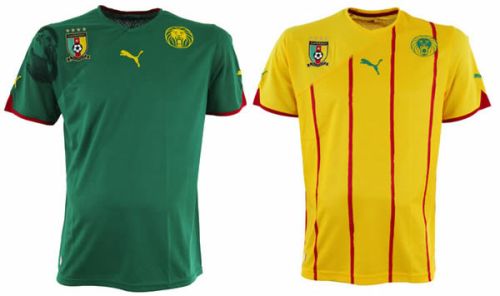 I think both of these are very good, especially the colors. I’m not a big fan of the odd red stripes on the away kit, but it’s still a good job. Though they could use more emphasis on one of the better international nicknames: the Indomitable Lions. 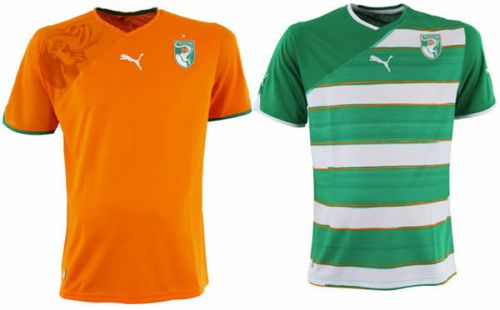 There are a distressing number of similarities between the Ivory Coast kits and the Cameroon kits, but that’s because manufacturers have taken templates to a whole ‘nother level. Is it really that hard to make an effort to be unique? The home kits are nearly identical with the Ivory Coast shoulder featuring an elephant instead of a lion and the federation badge moved to the other side. I suppose that’s something. Though I appreciate the elegant simplicity. I like Ivory Coast’s away kit, as well, though the horizontal stripes suddenly ending are just as jarring as the vertical stripes ending on the Cameroon kit. Oh, well.

Overall, I’d rate them good, though a little boring, kits.