At least for me. In the span of two days, the three teams I like best (Spain is a close fourth because I love the way they play, but that’s for another day) were eliminated in the knockout round. On Saturday, the United States was eliminated by a sturdy Ghana squad. On Sunday, England crapped the bed against Germany and Mexico was soundly defeated by a very good (though still unappealing) Argentina side.

1. Ghana 2-1 United States. Once again, the US failed to start when the game did. Five minutes in, Ghana’s Kevin-Prince Boateng scored a goal Tim Howard really should have saved. But he still scored. And that, in a nutshell, is the United States’s problem. The back four is leaky and slow. I love Jay DeMerit and I think he’s an excellent defender, but the fact is that he has no pace whatsoever. The goal was as much his fault as Howard’s. But that’s neither here nor there. The real issue is that the US starts slow. Unbelievably slow. It’s like the team needs to play from behind to show any urgency (the exception was the Algeria game, when the urgency of elimination was there from the beginning – where was that in the bleedin’ knockout round??). I’m at a loss to explain why the US does that. It’s unfathomable, to me, that the team cannot get up for an elimination game in the World Cup. Perhaps that’s what’s missing: some sort of killer instinct. Someone who’s ruthless and demands more and more from his teammates. What US soccer needs is some sort of Kobe Bryant or Michael Jordan, at least in terms in competitiveness.

2. Germany 4-1 England. Great players, terrible team. That’s the refrain played in England (though it must be noted that England has an inflated sense of its place in world soccer, much like Mexico; again, fodder for a later post). England never looked good at all. There was something wrong with the team from the beginning. I like Fabio Capello and believed he was the right choice for England manager, but he made a bad call playing Jamie Carragher. Carragher simply doesn’t have the pace to play against the world’s best strikers. Too late, he inserted Matt Upson, who was a much better fit beside John Terry. Compounding that mistake was his misguided faith in James Milner as a wing player when Joe Cole was a much better option. Finally, the team failed to include Wayne Rooney, a top-5 striker in the world (at least this year). The failure to get Rooney involved is the squad’s biggest failure and the best proof that England’s best players cannot play together. Perhaps it’s time to look to support players – players who fill vital roles and rely on a few big names (Rooney, Gerrard, and Terry among them; I remain convinced that Lampard and Gerrard cannot play together and that Gerrard is the better player).

3. Argentina 3-1 Mexico. The scoreline is deceiving. Argentina dominated Mexico in this game. In fact, the only thing that could have saved Mexico was if Carlos Salcido’s amazing 8th minute strike had gone in. Instead, shaky Argentine keeper Sergio Romero got just enough of it to direct it off the crossbar. Bad luck went further against Mexico when Carlos Tévez’s goal was wrongly allowed to stand. In the end, that didn’t matter. Argentina outclassed Mexico from the 20th minute on and thoroughly deserved their win, even though I cannot root for them because of Diego Maradona. During the match, the commentators suggested that Maradona was responsible for Argentina’s success. I humbly suggest that my cat could manage Argentina to the knockout round. Maradona doesn’t really have to earn his money so long as Lionel Messi and Javier Mascherano are on the pitch. And that’s all I have to say about that.

On to Group D, which is a very colorful group of home jerseys. 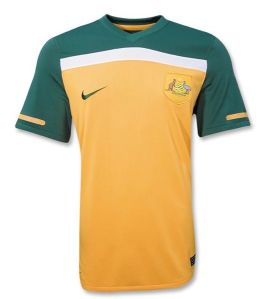 Australia goes to South Africa in its traditional gold and green shirt. I’m not sure about the green shoulder pads but the simplicity is to be admired. It seems as though Nike is looking to simplify things with only a few strong lines in its jerseys (Brazil is an exception, but I’ll get to them later). Australia’s shirt works, for the most part, shoulder pads aside.

Germany’s home jersey is very, very traditional. There’s really nothing wrong with it, though the one stripe is somewhat interesting. Perhaps the one stripe is Adidas’s desperation move for at least one piece of flair. Fortunately, the German tradition means that Adidas can’t screw with them.

Ghana away jersey for the 2010 World Cup

Just to switch things up, I’m posting Ghana’s away jersey for the World Cup (the home jersey is white and very uninspired). I like Ghana’s away shirt (by Puma) even though it’s the same template as Algeria’s shirt (though without the awesome Desert Fox on the shoulder). In this case, the shoulder is empty but the red and gold stripes more than make up for it. I like the color scheme and think it will look fantastic on the pitch. 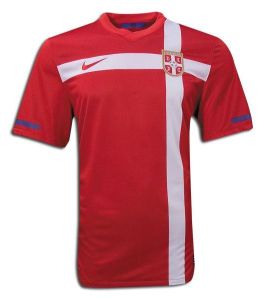 This shirt vaguely recalls England’s from a few years ago, when it had a stylized Cross of St. George on the shoulder. In this case, the cross is off-centre and, once again, demonstrates Nike’s renewed commitment to clean lines. For that, the company should be commended. But back to Serbia. I like the colors and I like how the FA’s patch reflects the shirt’s design. I think that’s a rather subtle addition that gives the shirt some more character.

I view Bayern Munich’s sacking of Jürgen Klinsmann in light of my previous post on stability. I don’t see how giving a new manager – and a first-time manager, at that – less than a season to prove he knows what he’s doing is fair to the manager or the fans. If the Bayern board were so unsure of Klinsmann’s managerial skill, why give him the job? I know the answer of course: he guided Germany to the semi-finals in the 2006 World Cup and people believed he was the next big thing, in terms of managers. Again, though, why sack him now?

To me, the decision smacks of impulsiveness and childishness.