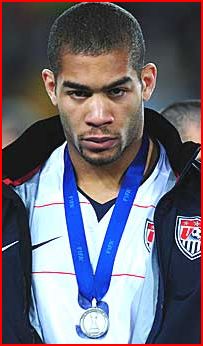 Now that’s a step up. Maybe.

US defender Oguchi Onyewu signed with AC Milan on a free today just when their fans were questioning their transfer policy. Not surprisingly, some fans are still upset that the team sold Kaká to Real Madrid. Go figure.

Milan has been linked to prominent forwards – including Luis Fabiano, Klaas-Jan Huntelaar, and Emmanuel Adebayor – but given that they have Alexandre Pato and he’s apparently not going anywhere, I think they need to shore up their back line. A quick look at their roster indicates to me that they have three or four quality defenders and that all of them are getting rather old. Onyewu is a good start but, really, they need to add more depth and quality there. Re-patriating Andrea Barzagli would be a good first step. As would looking for other young Italian talent. Perhaps, if they’re bent on adding an attacking player, Giuseppe Rossi should be a target since he would provide speed in midfield.

Although they haven’t really made any mis-steps in the transfer market yet, the team did hire an unproven manager: Leonardo Nascimento de Araujo, better known simply as Leonardo. While I understand the name has a certain appeal to Italians and that Barcelona hired unproven Pep Guardiola last year, it seems to me that Leonardo, who had worked at the Technical Director, is more cut out to be a backroom man than the guy up front. Then again, he might prove me wrong. Though I doubt players are lining up to transfer for him like they would be for Carlo Ancelotti.

Filed under Serie A

Kaká’s transfer by the numbers

Two days. That’s how long Kaká’s reign at the top of the world record transfer list lasted. On 9 June 2009, he moved from AC Milan to Real Madrid for £59 million. This is after saying, in January, that he would stay at Milan for the rest of his career. Six months later, he’s off to Madrid.

30 percent. That’s how much salary AC Milan must cut because of the worldwide economic decline. Apparently, when he turned down the January move, Kaká agreed to a personal salary freeze. The move to Real Madrid puts money in the player’s pocket and the team’s. ESPN, which was not the only outlet to report this, decided that Kaká moved not only to help himself but also to help AC Milan.

The number 18. Kaká’s reported shirt number at Real Madrid. This is fascinating to me because shirt numbers say a lot. Some players want a specific number at all stops; others don’t care. Kaká is interesting because he wore number 8 at São Paulo, then number 22 at AC Milan. He wore number 8 with Brazil but has since changed to number 10 (which is, of course, sacred in Brazil and in the larger world of soccer).

Tragically, ESPN decided not to show my team, Manchester United, take on Lyon. Instead, they’re airing Arsenal v. AC Milan. Now, normally I’d only watch the Arse to see them get thrashed, like say, the 4-0 drubbing at the hands of United on the weekend. But the Champion’s League is the Champion’s League and Arse is very, very good. With that said, Milan is also very, very good and has enough European pedigree to make anyone quake in their boots. So I’m watching.

It’s been billed as two technically proficient teams doing battle in the pre-game reading I did. I have to agree with that. Arse is also pretty young while Milan are experienced. I’m a big fan of Gattuso and Fàbregas so it’ll be nice to see them do battle.  Tuning in to ESPN, Tommy Smyth and Derek Rae are the commentators for the game and they’re always entertaining. I just learned that Kaká has 23 goals in 56 Champion’s League games. That’s ridiculous! Also of note is Alexandre Pato is making his first Champion’s League appearance. This makes me happy. It also makes me happy that he’s wearing hilariously gold boots. Awesome.

– the game starts out slowly, with each team wary. Arse tries to press but is turned back by the outstanding Milan defense. An exception is a beautiful pass by Lehmann that springs Adebayor at 10 minutes. Only a brilliant recovery by Oddo prevented that from being a goal

– Kaká was noticibly absent for the first 19 minutes. He had only 2 touches in the first 14 minutes. That’s not good when you’re the best player in the world

– Nesta v. Adebayor is a match-up to watch as the game goes on

– Fàbregas finally shows up, 25 minutes in, and makes a lovely pass to Adebayor

– at 27 minutes,  Kaká had a chance to shoot but chose to pass instead; he muffed the pass and the threat was neutralized

– Glichy gave it away to Pato on a throw-in; Fàbregas saves his bacon by dispossessing Pato (28 minutes)

– 30 minutes in, Arsenal are looking good. Milan’s been on its heels the entire half so far with Arse taking the initiative and pushing hard for a goal. Arse’s forwards look too fast for Milan, esp. Adebayor.

– HORRIBLE pass by Adebayor to Fàbregas. Fàbregas was free in the box and would’ve scored (41 minutes)

– brilliant move by Hleb at 43 minutes

In sum, Arse played their game but couldn’t score a goal. They need to keep pressing and get that goal. Milan need to use the counter-attack more effectively. What they really need is a couple of creative wings. Instead, they’ll have to find some way to spring Kaká. Pirlo was strangely absent.

– two good runs, firstby Milan then by Arse on the counter-attack (51 minutes)

– wow, Arse finally hit their stride: three good runs resulting in Eduardo’s shot at the goal. Arse are really pressing here and Milan are back on their heels (55 minutes)

– Arse continue to press. They’re playing the way soccer should be played: attacking with flair and defending with purpose. Arse truly practice a beautiful game. (60 minutes)

– Milan have really pressed Arse in the last 5 minutes. It’s been very entertaining, much more so than the first half (66 minutes)

– Pato is hurt. This is not good. Gilardino comes on for him. (77 minutes)

– Kalac with another huge save on Fàbregas! Amazing! (82 minutes)

– Arse are taking it to Milan again (82 minutes and forward)

– Milan are playing for the draw (90 minutes)

– at 94 minutes, Walcott with a great run and cross to Adebayor but he hits it off the crossbar! So close!

Exciting half, far better than the first half. Arse are very, very good with sustained periods of attack. It was truly impressive to see. Milan weathered the storm and used their counter-attacks very well. Pirlo and Seedorf played terribly. Kaká was merely okay. Kalac deserves a raise for how well he played. Arse must be terribly frustrated. They played their game for long stretched but couldn’t score. Fàbregas is clearly Arsenal’s engine and he showed it. When he played well, the whole team played well. They need to get him the ball more often in the second leg.

The second leg is in 2 weeks. Should be awesome.