Directed by Alejandro González Iñárritu. I love the Rooney part.

Group G is home to one of my favorite colonial smackdowns of the World Cup: Brazil v. Portugal. Will the colonials best their former masters? Who knows! It’ll be a good game, though. On to the shirts…

Puma again treats us to the subtle shoulder graphic, which works especially well here. Ivory Coasts nickname is the Elephants and yes, kids, that’s an elephant on the shoulder. And yes, that’s totally awesome. While the elephant makes the shirt, the rest of it is beautiful simplicity. I hope Ivory Coast advances from this group just so I can see the shirt in action (though that probably won’t happen).

At least I assume this is what North Korea’s jerseys will look like. 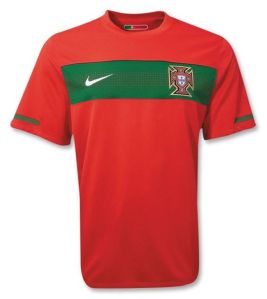 I like Portugal’s jerseys for the 2010 World Cup. I like the red home shirt, even with the green stripe, and I like the white away jersey (which has both red and green stripes). But the Portuguese FA’s crest is the best part. I love everything about it and I especially love how it’s so totally different from every other crest. And it doesn’t look out of place on either the home or the away shirt. And just for fun, Portugal’s away shirt:

Portugal away jersey for the 2010 World Cup

See? I told you it was good.